There are a couple Eagle Creeks in Oregon. There is the Eagle Creek in the Columbia River Gorge that has been featured in a number of kayaking videos with big, runnable waterfalls and dramatic gorges. This Eagle Creek flows into the Clackamas River about 6 miles west of the little town of Estacada and contains lots of Class 2-3 rapids and a few easy waterfalls. Eagle Creek flows south out of the Salmon-Huckleberry Wilderness and was ground zero for one of the most contentious anti-logging protests in Oregon back in the late 90s and early 2000s.

The upper section of Eagle Creek has been on my radar for a long time. I’ve done the middle and lower sections many times over the years but for some reason, never ventured up to the upper section. The description in the guidebook doesn’t exactly make it sound like an outstanding run and there is the hike to the put-in….maybe I’m just getting old and less adventurous.

View from the put-in

Finally the day arrived and what a day! Sunny and close to 70 deg. Really the first real spring day we’ve had this year. When I tried to get to the put-in earlier this year there was too much snow on the road but today, there wasn’t any snow in sight. We stopped a bit early on the drive to the put-in and decided to hike because I wasn’t all that excited about getting my car beat up and stuck. After a hiking probably 2 miles or so we could see the river and started to look for a way down. We were in some really nice old-growth forest so getting down to the river was pretty easy. Once there we found a low but o.k. flow and got geared up to do some rock bashing until the creek picked up more water.

Paul bashing some rocks early in the run 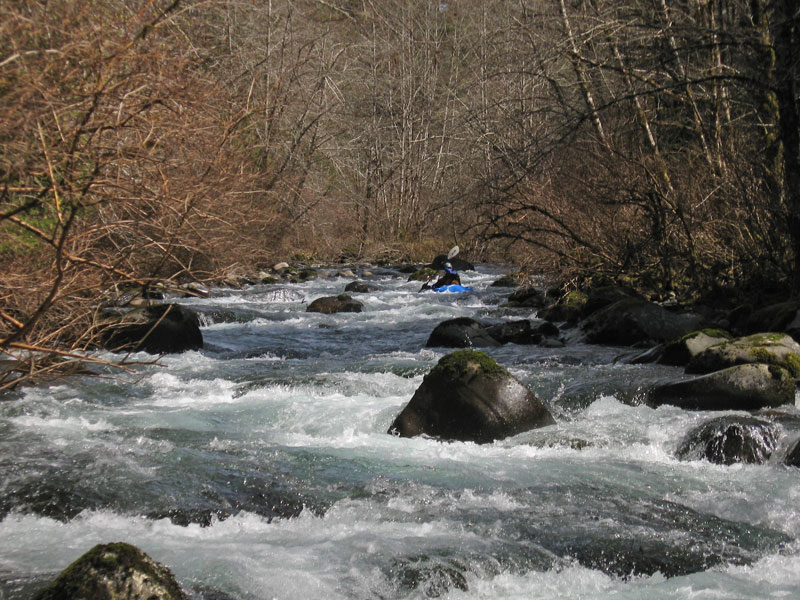 After quite a bit of rock dodging, rock bashing and one portage around a log, the creek finally started to consolidate and some nice, small rapids appeared.

Paul at the beginning of the good stuff 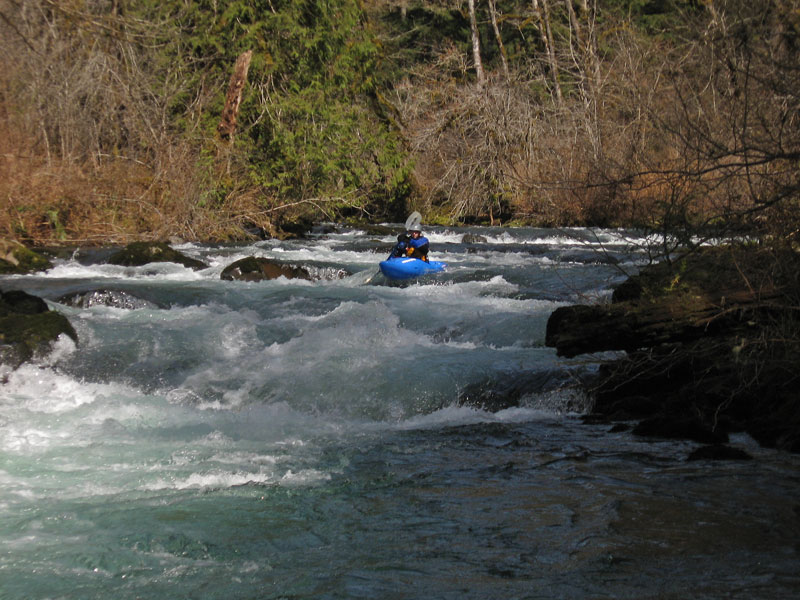 Most of this section was boat-scoutable but we stopped every now and again to check for wood and take some pictures. The scenery was excellent and the rapids were very classy and fun Class 3.

Paul in the middle of the good stuff 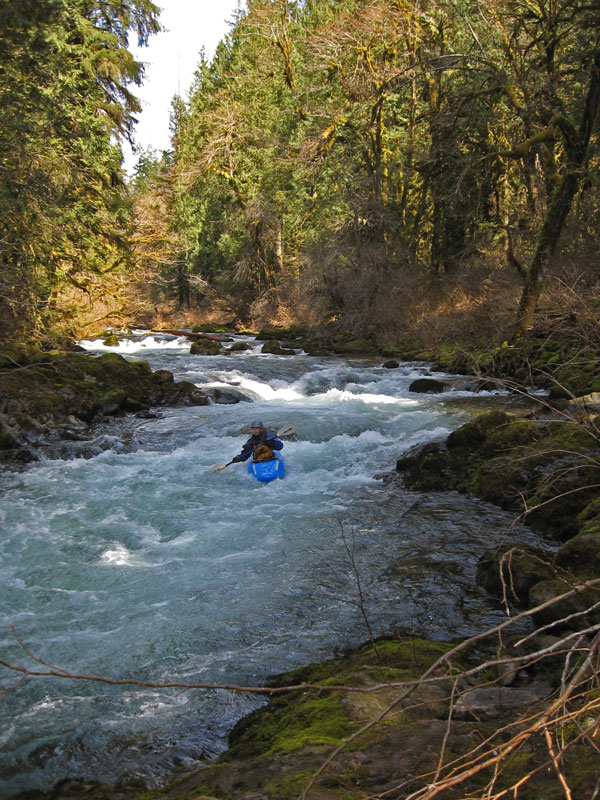 More nice stuff around the corner 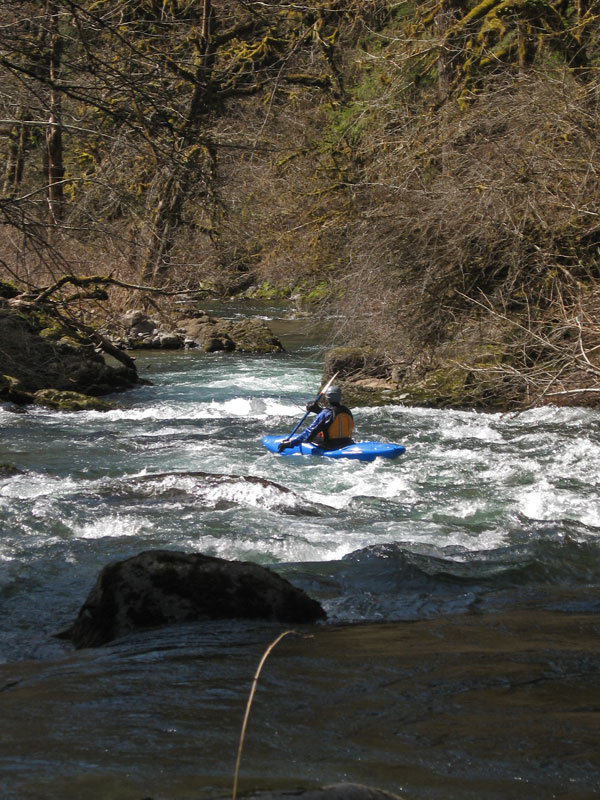 With the change in the geology and the fact that it seemed like we’d been paddling for quite a while, we knew we must be getting close to the waterfall at the end of the run. As we rounded a corner it was obvious that we’d arrive. The falls really wasn’t anything like what we both expected from the guidebook description. I was expecting a friendly falls similar to the ones on the lower sections. Maybe it cleans up with higher water but it was a bit ugly at the flows we had. Very runnable but a bit ugly. It’s too bad because the man-made features of the falls really made it much harder to run safely. 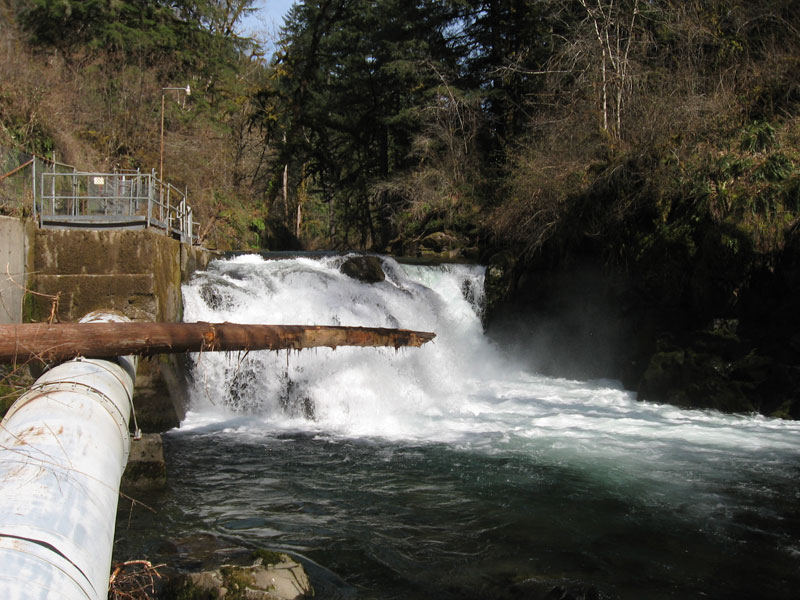 We both chose to portage along the structure on the right and after hanging out for a bit, ran the small weir in the run-out of the falls and headed downstream. We decided to run all the way through the hatchery and hope that the electrified fish barrier wasn’t in play before the take-out. I probed and wasn’t electrocuted so Paul came through and we took out at the put-in for the middle section.

I hopped on the moped for the shuttle and Paul took a nice nap in the sun. I was pretty satisfied with the run after waiting so long to do it. I think it makes a great mini-exploratory run for those interested in a mild adventure off the beaten track. With higher water levels the upper section would be fun, the rapids above the falls would be great, and the falls might be more runnable. Definitely worth checking out, particularly on a sunny, warm spring day.