Happy to have escaped a beat-down below/behind the falls 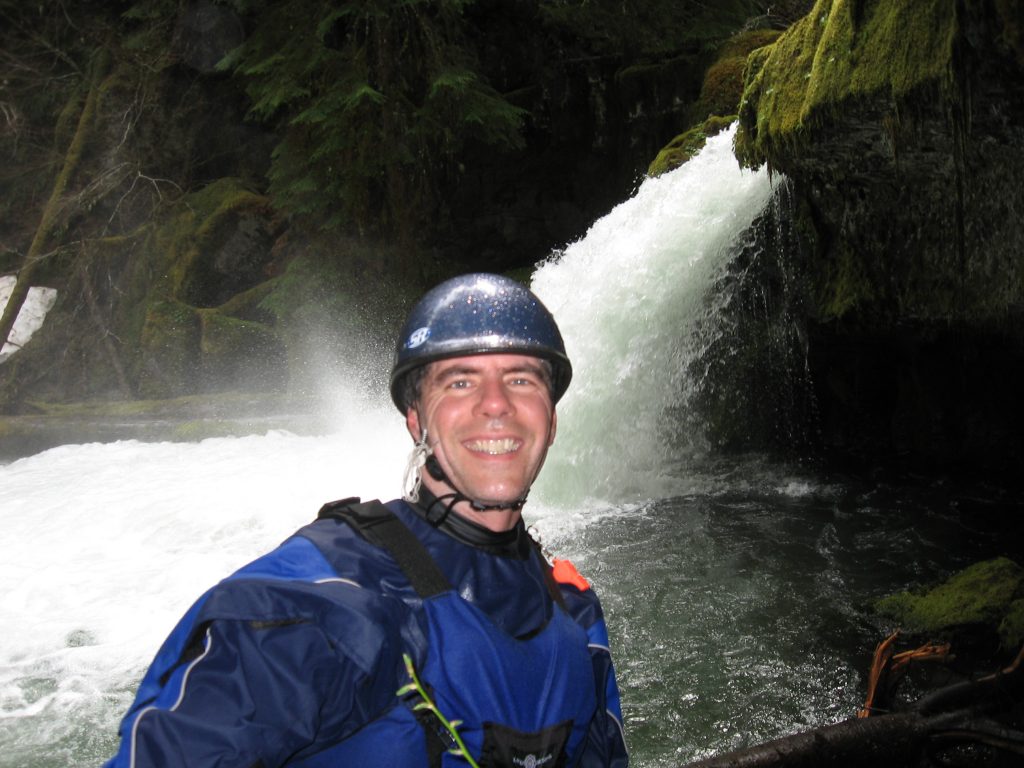 It seems like a long time ago when I first ran Nohorn Cr. It was back in 2001 when I’d really only started poking around looking for some new runs in the area. Nohorn was a surprise and in hind-sight, we got pretty lucky the first time we did it. I’d only scouted the put-in and the take-out and didn’t have any idea what was in between the two. We put on with no real beta and had a pretty good time with relatively manageable wood and some fun rapids. As is usually the case, I did a flurry of runs after the first and then moved on to look for other runs and kind of forgot about Nohorn. Of course, it didn’t help that the last time I ran Nohorn, the best drop on the run was choked with wood.

Over the last couple years, Nohorn had crept back into my consciousness and I began to wonder whether high water over the last couple winters had cleaned out the wood in Nohorn. Ever since the first descent, I’d wondered what lay upstream and this finally inspired me to get back up to Nohorn.

My first goal was to look at the upper section above the usual put-in and I was pleasantly surprised to find a sweet 10 foot waterfall at the beginning of this section. This was enough for me, so, on May 8th I headed back out to run a new waterfall and try my luck on the rest of Nohorn.

View from the put-in 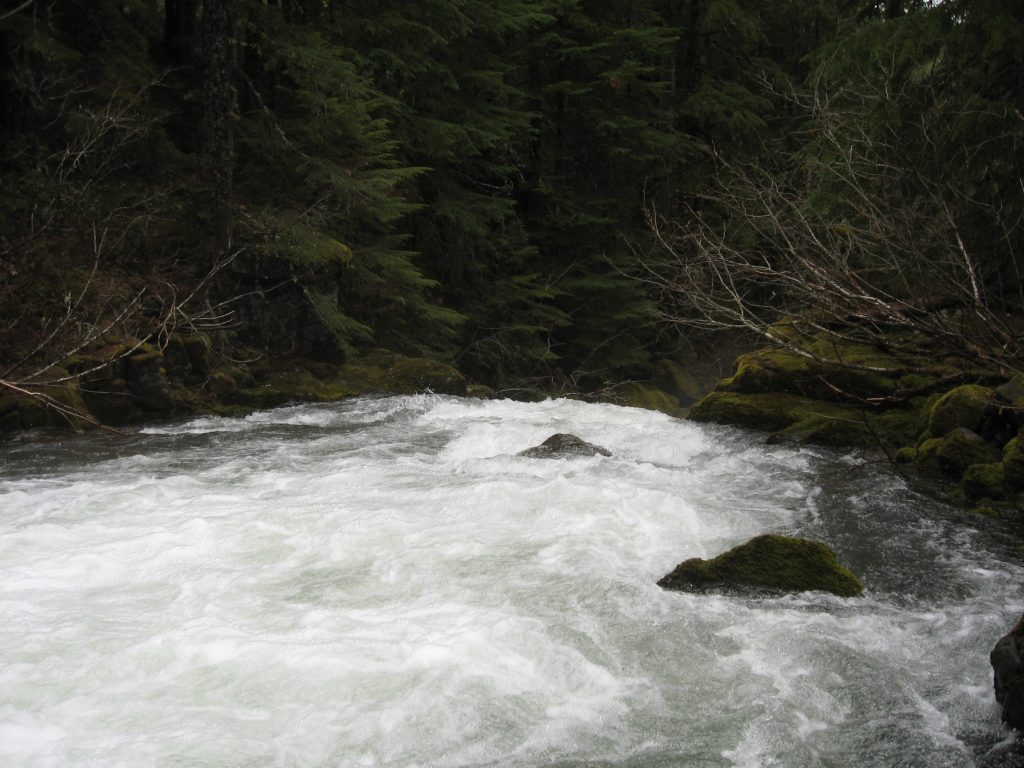 After a short hike through snow to get to the put-in, I scouted the falls and while it looked a bit more powerful than at low water, I figured at worst, I’d get pushed over into the eddy on the left bank. I figured I had about 10 warm-up paddle strokes before the falls so I spent some time visualizing my line, splashed some water on my face and pulled out of the eddy. Everything felt good lining up and I waited to put in a boof stroke. Well, that didn’t seem to happen or it didn’t make a lot of difference as I took a good hit at the bottom, felt the kayak start to stand up on end and flip over. I had a brief panic when I thought I was getting pulled behind the falls but I felt some resistance on my paddle and rolled up as I was flushing over to the left bank. I didn’t realize until I got over there that my skirt had blown and I was quickly sinking. Never the less, I was pretty excited with my run. There is something special about running a drop for the first time by yourself.

After emptying out my boat and taking a couple pictures, I headed off downstream and quickly made it to the regular put-in. From here I remembered enough of the run to boat-scout most of the rapids for wood and to remind myself of the lines. I quickly realized I had a great, medium water level and was surprised at the quality of rapids and scenery. Maybe I hadn’t noticed either on previous runs because we were busy dodging wood, but I was starting to have a lot of fun. 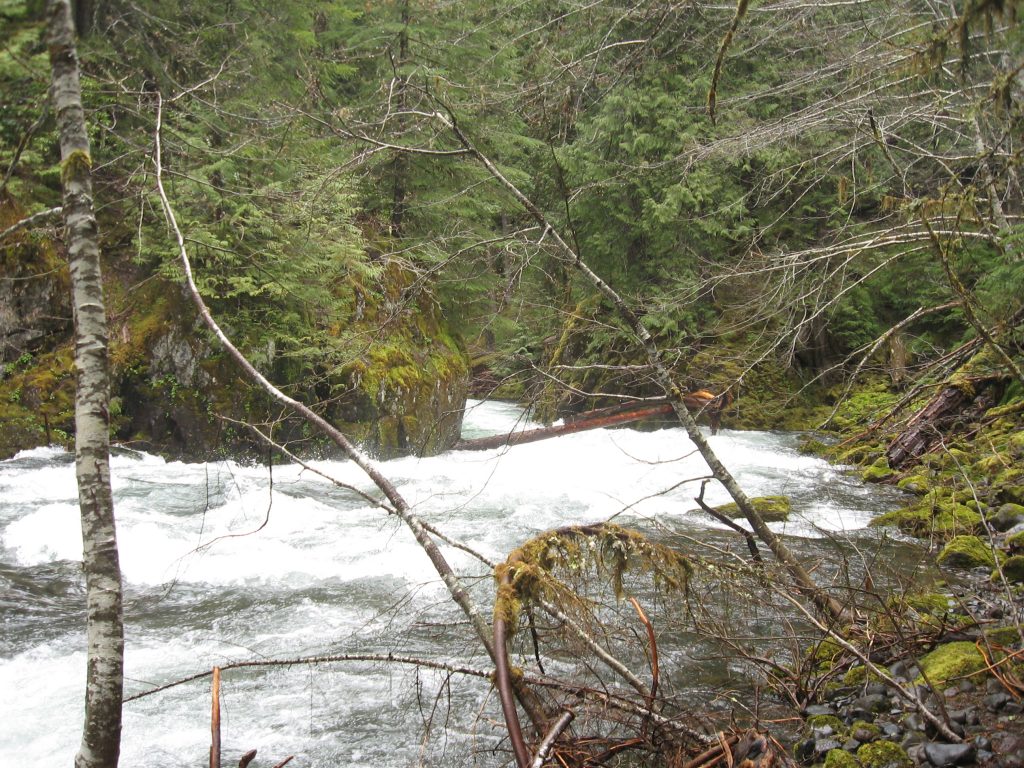 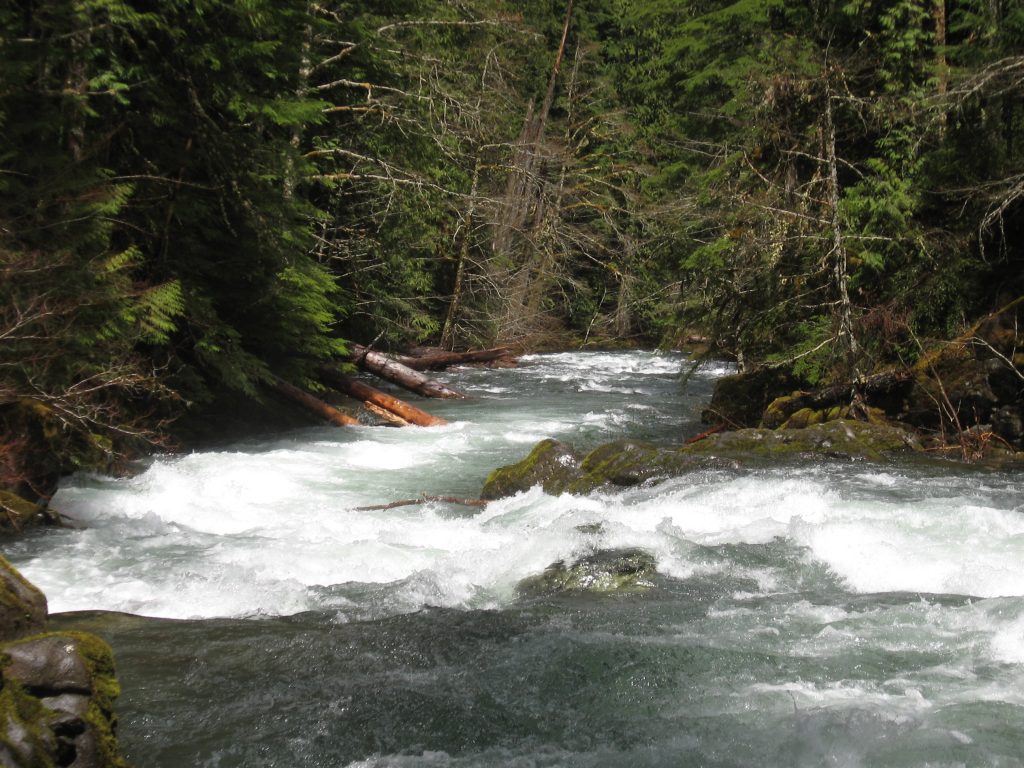 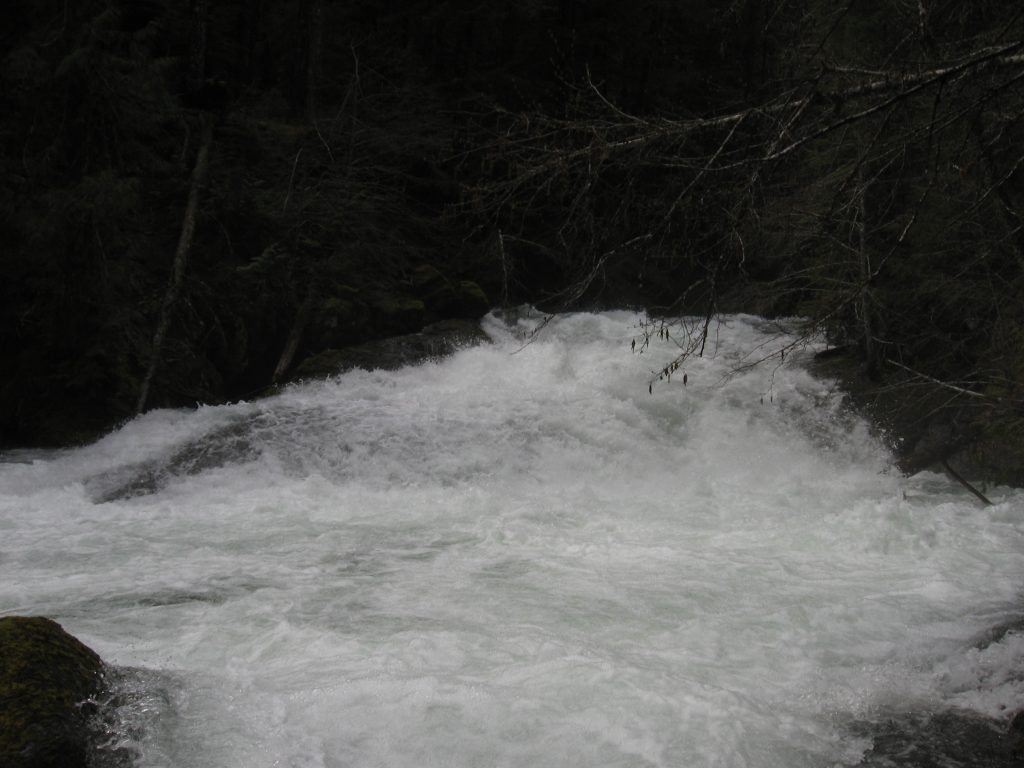 Surprisingly enough, I found the portage on the left much easier than what we used to do in the past and there is a very big eddy to get out above Cookie Monster. Happy with myself, I headed downstream knowing that the next biggest rapid on the run is just below Cookie Monster. This drop was completely messed up with wood the last time I’d been down here but I was hopeful it had cleaned up over the years.

A quick eddy on the left after seeing the clean lead-in, a short scramble up under some rocks to get a look at the bottom of the rapid and I was happy but disappointed to see that while there wasn’t nearly as much wood as last time, there was a huge log right in the middle of the last drop of the rapid. There was a pretty clear line on the right that I contemplated for a long time and knew I could make but….the chances of self-rescue if I missed the line were pretty slim. So, with much regret, for once, I erred on the side of caution and resigned myself to the crappy portage. This was pretty exhausting.

A little bit of wood but it all goes 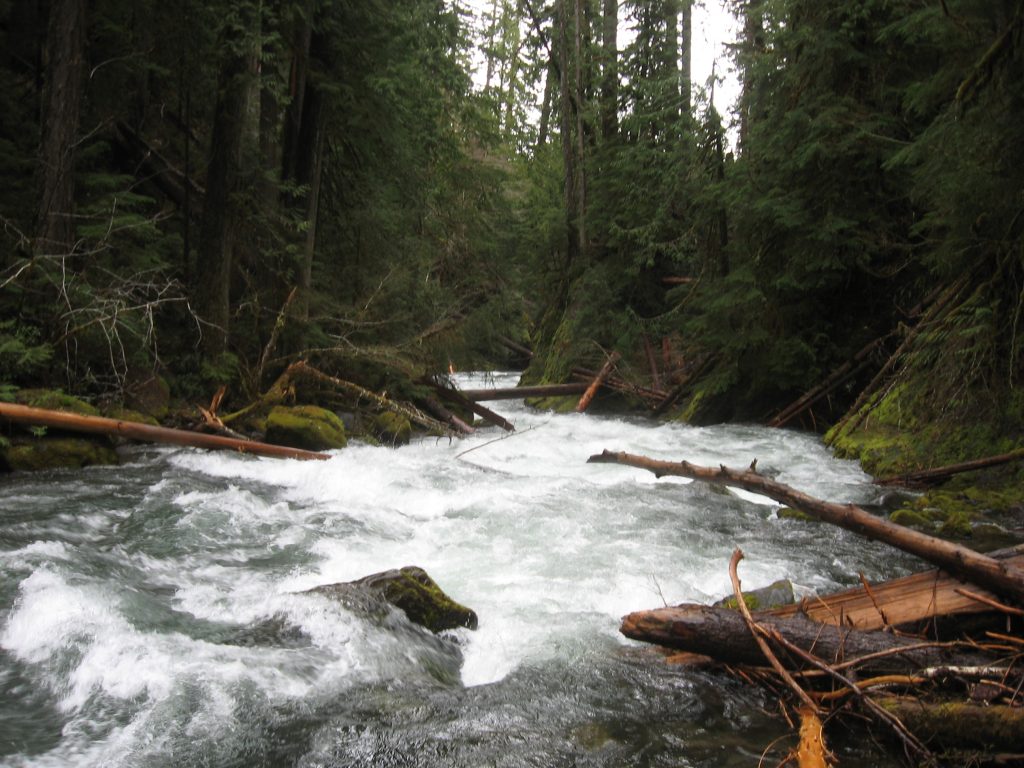 Below this rapid are a couple other good rapids and then I was above the lead-in to the last ledge at the take-out. After a fast lead-in, most of the water pushes to the left and drops about 10 ft. onto some rocks with wood wedged into them. Not a good place to be. The safe move is to run the lead-in and then quickly move to the center where the ledge is clean. The water is pretty shallow at the top so it is a bit hard to get any traction with a paddle.

After a short scout, I pulled out and accelerated into the lead-in. As I turned to the right I hit a hole and got stopped for a bit. Not part of the plan but as it turned out, the hole surfed me to the right where I was able to line up well for the ledge. Pretty exciting stuff to finish the run. 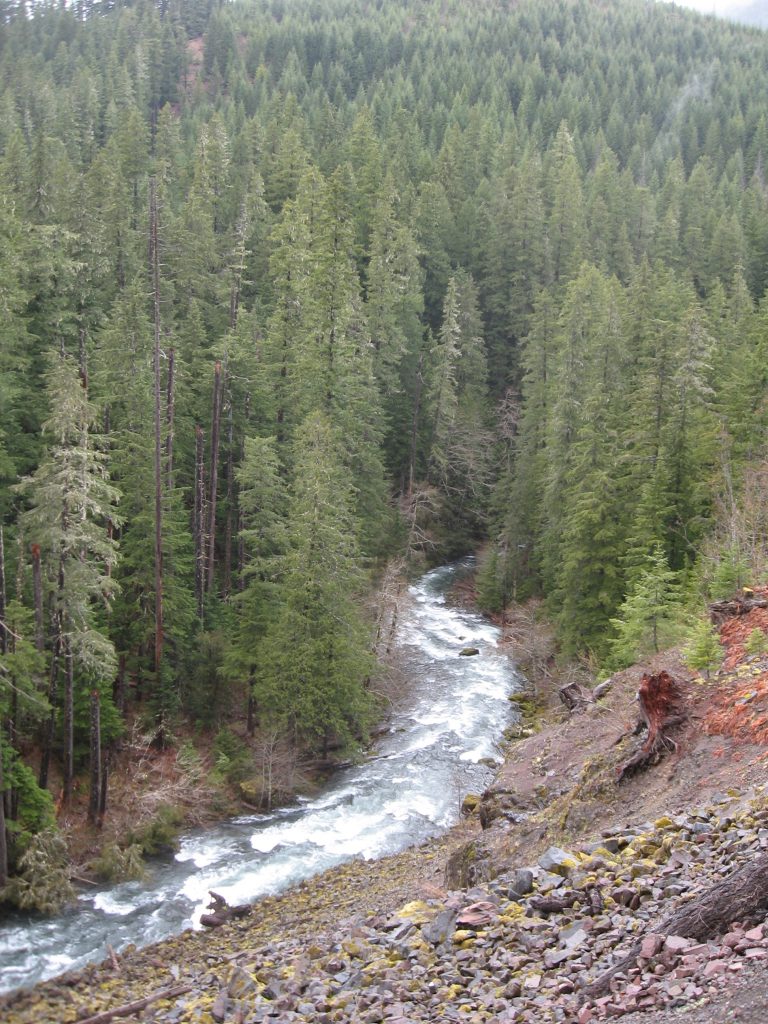