The author drops the dam 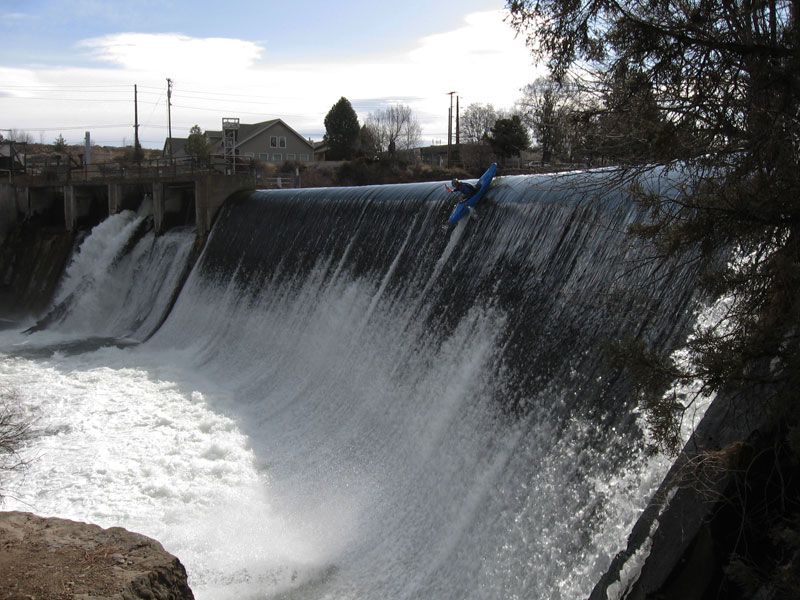 I last boated the Riverhouse Section of the Deschutes probably almost 8 years ago; long enough that I can’t remember exactly! The only other time I was in Bend, we ended up doing several other sections and skipped the Riverhouse section of the Deschutes. Other than that, I hadn’t been back in Bend for boating for one reason or another. This year, I headed over to Mt. Bachelor with my girlfriend to do some skiing for a couple days and took the chance to do a quick run down Riverhouse on Sat., March 14th.

The last time I was there, I don’t remember anyone even talking about the possibility of running the dam just upstream of the usual put-in for Riverhouse. But, times change, and I’d heard from friends that the dam was a great way to start the run. From the scout the dam looks straight-forward enough until I got in my boat and started to line up on the drop. From the lip, the drop is big enough to get the adrenaline flowing! I spent a couple minutes right at the edge trying to line up in order to miss the tree in the run-out and to calm my nerves a bit and then I dropped over for a fast ride down the face of the dam and through the hole at the bottom. It was a really smooth ride as my kayak maintained contact with the dam all the way and I punched through the hole and past the log with no problems. My friends were right, great way to start the day!

The author blasts through the bottom hole below the dam 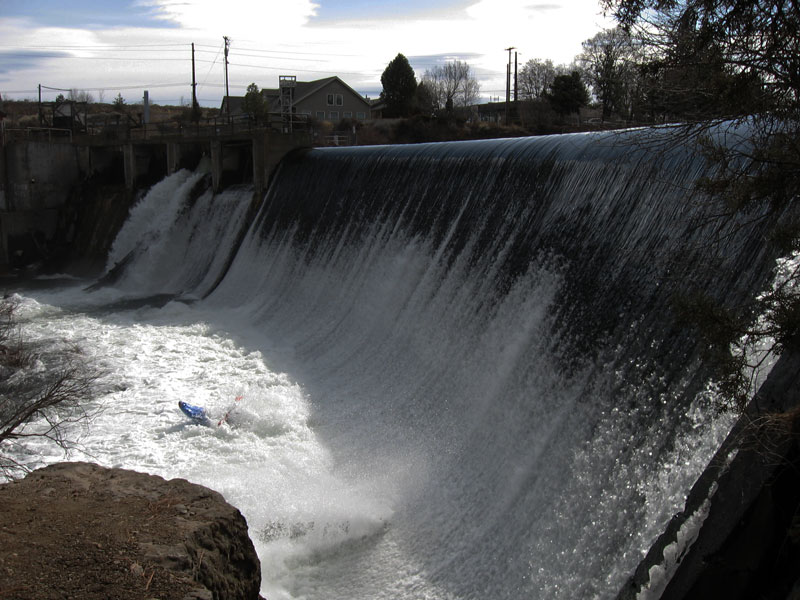 Below the dam the river slides through a small rapid as it goes under the road bridge and then flattens in a long pool. As I was to find out throughout the run, the houses are so close to the river in this section that I felt like I was trespassing. Because the flow is regulated on the whole length of the Deschutes, folks can build right to the edge of the water and sometimes beyond without fearing from floods. Kinda depressing from a boaters viewpoint.

Anyway, for the first couple miles the run alternates between punchy rapids with some waves and holes and flatwater. Everything is scoutable from a boat and the rapids are a nice warm-up for the bigger stuff downstream. Shortly downstream there is a small ledge drop known as The Wright Stuff that has a couple chunky lines. I picked my way down the left side a bit, caught a small eddy just before getting pushed over the lip, lined up for a boof in the center and came through with no problems. I think there is a right-side line as well but both lines have the chance of a piton so choose well.

A little further downstream is a fun rapid called Flumes of Doom. Here the river splits around an island with the most interesting rapid in the left channel. I had planned to boat-scout this rapid as well, but the line isn’t super obvious at the top, and, to be honest, I really didn’t remember anything about what the rapid looked like from my previous trip. I caught a small eddy on the right and wedged my boat between two rocks which allowed me to stand up in my boat and get a look at the entrance of the rapid which consisted of a zig-zag move between two rocks and then what looked like a good boof on the right. I got back in my boat, immediately blew the first zig-zag move, caught an eddy to re-group, ferried back out to the right and hit the boof. Good stuff! Just downstream the river rushes through some fast waves and a couple holes as the right channel re-joins the left channel.

After a few small rapids and some calm floating, the river bends back to the right and begins to accelerate down into T-Rex Rapid. T-Rex is long with a nice zig-zag move at the top to avoid a couple rocks and holes and then a steep drop into the pool below. The drop at the end is tough to scout from the river and the left side drops onto some rocks. I was able to catch a small eddy on the left, scout my line a bit from my boat, and then ferry back to the middle for a good boof over the ledge. The far right-side also looked to be clean. 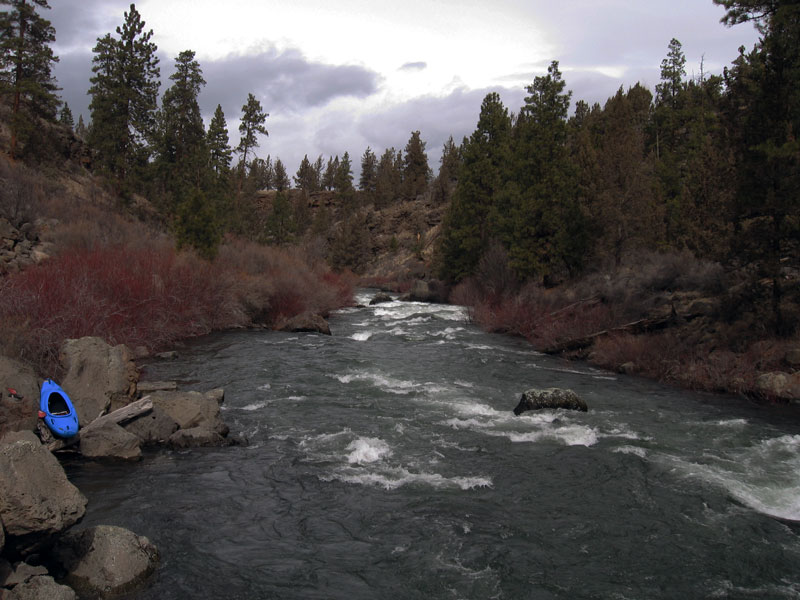 Shortly below T-Rex is the last big rapid of the run; Ogre. Ogre doesn’t have a lot of places to stop above it to scout but I was pretty confident that it was really a big flush down the right side. Sure enough, the right side drops into a big wave pushing back to the middle and down through a big hole at the bottom. Really fun! Below this are a couple smaller drops and some rock-dodging before the river really starts to mellow out.

Looking back up at Ogre Rapid 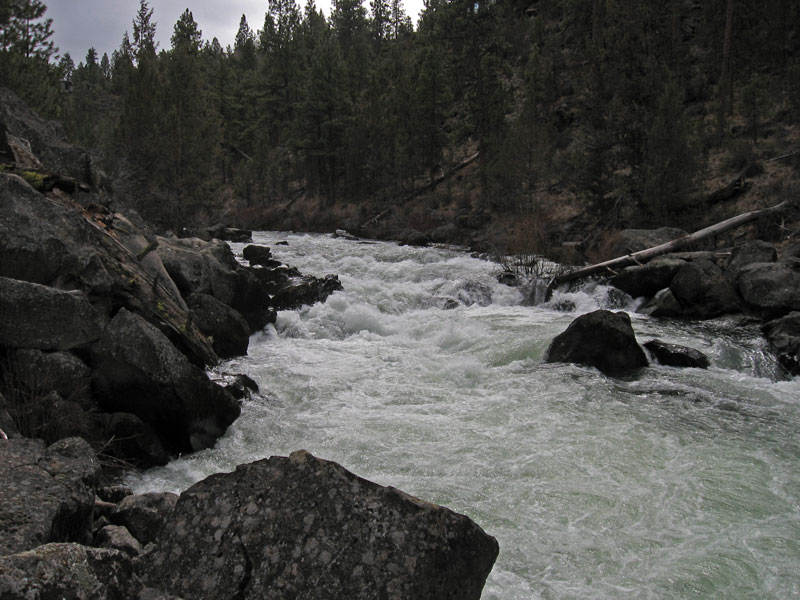 Looking downstream from the bottom of Ogre 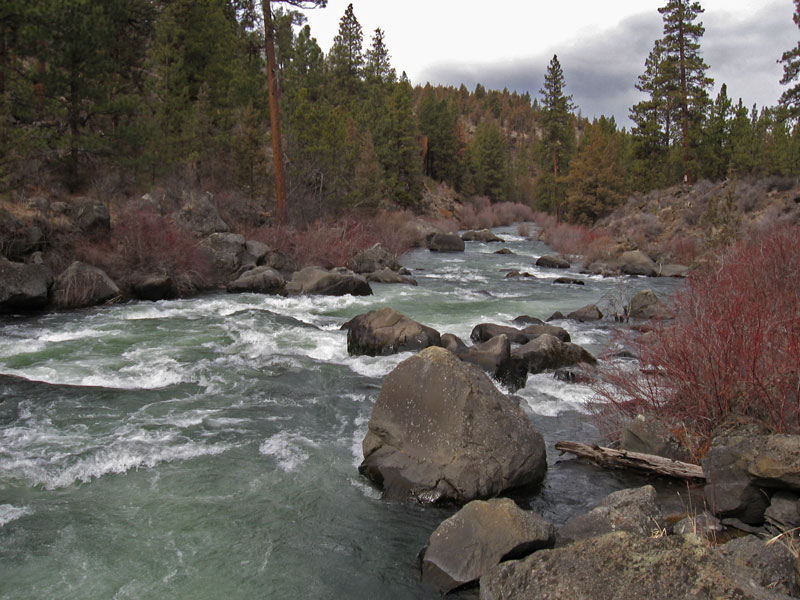 After Ogre I was trying to hustle because I was a bit late for meeting Lisa with the shuttle but this stretch has some of the prettiest scenery on the run and there are, finally, few houses in view. There is at least one surprise rapid in this section and a couple nice play waves to keep things interesting.

All in all I had a great morning on the river. I took about 1.5 hours to do the run and could’ve stretched it a bit longer if I’d wanted with some play and mellow floating. Hopefully it won’t be another 8 years before I come back to Bend for some more boating. Thanks to Lisa for running shuttle and taking some great shots of me running the dam.