I found myself bored during a low water week and when I’m bored I either pull out some topos and hunt for some new runs or re-read guidebooks looking for runs I may have overlooked. This particular day I had the guidebooks out and was confused. There seemed to be a “missing” 1.5-mile section of the WF Hood River. The only thing my Bennett guide mentioned was a nasty canyon in this “missing” section. Now this might be enough to put some people off but I was intrigued. Did “nasty” really mean “nasty” or did “nasty” mean “some great Class 5-5+ rapids which might be deadly at high water but real fun at low water”? The next time I was out on the regular WF Hood run I thought it would good to at least try to see a little bit of this section and see how “nasty” it really was.

After looking at the river from the canyon rim in several places I was shocked to see an incredibly beautiful canyon with an amazing gorge section which looked like it contained some fun Class 3-4 whitewater. Of course, this was from about 300 ft. above the river but, nonetheless, I was determined to come back the next day and run as much of it as I could. I talked Kevin and Marc into joining me although they had some concerns that this would evolve into a debacle. I assured them that it looked like we could scout/portage everything and that the canyon had some incredible scenery. After all, I’d seen at least 2/3 of the canyon. How “nasty” could the other 1/3 be?

The river below the putin 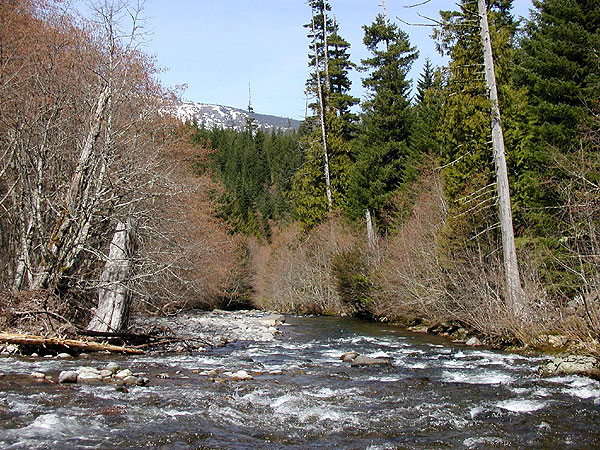 The rapids downstream of the put-in bridge were trashy, low water boulder gardens but we didn’t have to wait long for the action to begin. The gorge walls quickly closed in and we eddied out in a pool above a steep horizon line. After Marc scouted that the narrow exit was clean of wood, we all ran this fun short plunge.

Getting ready to run the first rapid while Marc looks on 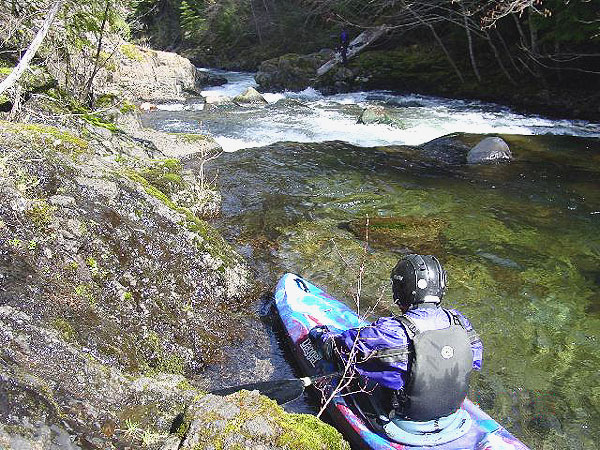 I was getting pretty excited at this point as there was another horizon line and pinch just downstream. This rapid turned out to be a fun Class 3 drop that ended in a small pool above the gorge section we had scouted from the road. The view downstream from this pool was fantastic as the river continued to stair-step between sheer walls for as far as we could see. We moved pretty slowly through these drops, as we were concerned that they would be bigger than they appeared from our scout. As it turned out, all the rapids in this gorge section were technical Class 3. 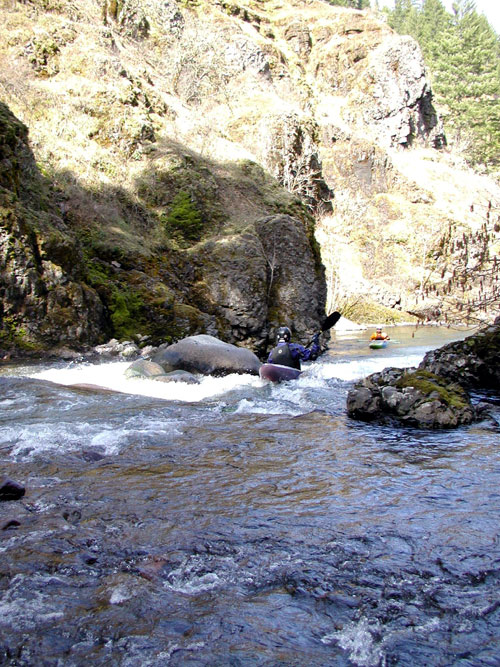 For the next ½ mile the river alternates between shallow boulder gardens and small ledge drops until the river narrows dramatically and drops out of sight into a steep walled gorge. Marc and I got out to scout the gorge while Kevin decided to run the first drop into a small eddy near where we were scouting. At first the gorge looks really sieved out but getting closer I could see a couple clean lines down the majority of the rapid. Unfortunately several logs blocked the narrow exit. After pondering the consequences of missing a small portage eddy directly above the logs, Kevin and I finally resigned ourselves to following Mark who was already portaging his boat up the steep bank into the woods.

As we were roping the boats up the bank my boat got knocked into the river and proceeded to make its way down through the gorge. Mark got a view of it disappearing under the wood at the exit and then lost sight of it. As I ran through the woods downstream I was envisioning a long hike out of the canyon without my boat until I saw the boat wedged on a rock at the lip of the next rapid. Kevin was able to climb/swim out to the boat and we proceeding the last ½ mile down to the take-out.

Looking down into the canyon 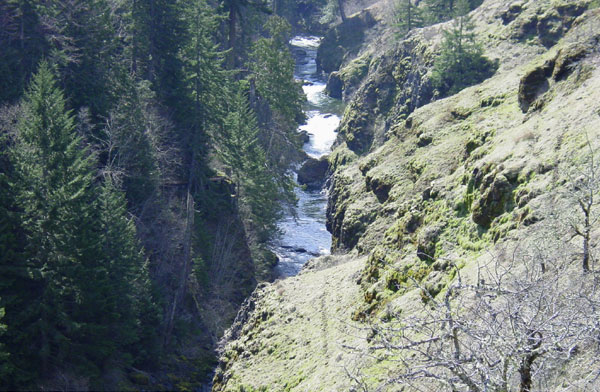