Way back when I was working at OSU, I used to spend a fair amount of time driving throughout the Coast Range doing forest ecology research. One of the benefits of this work was discovering some pretty cool, obscure places. One road over to the Nestucca River dropped off into a steep canyon on one side and I’d always been intrigued about what kind of creek flowed at the bottom of that canyon. Steep walls and big trees obscured any real views of the creek from the road and because I was working at the time, I’d never really taken the time to stop and explore the creek a little more closely.

About 10-12 years later, as is very often the case, Jason and I were talking about new potential creek runs on the way back from kayaking; specifically what might be in the Coast Range. I mentioned that I’d always been curious about Bible and Testament Creeks in the Nestucca drainage but really hadn’t had the time to check them out.
“Bible Cr., huh” Jason said. “What’s that like?”
“Looks really steep and small and probably has lots of wood.” I replied.
Over the next year or so Bible Cr. would come up in similar conversations. Usually like: “What about that Bible Cr.? What’s up with that?”
“Really steep, 400 fpm in the first mile, small, probably full of wood.”
“400 fpm!?”
And so on….

Finally in the fall of 2005 we got around to getting our first good look at the creek. Yep, small, steep and lots of wood. But maybe with the right flow…
So sue me, alright! I couldn’t resist. Something about that unknown deep canyon called to me and I had to listen. Probably going to be a debacle but if I get an early start….I mean it’s only 3 miles…

Christmas Eve day rolled around and with a little bit of rain and no pressing holiday plans this year I thought, “What the heck”, let’s see about that Bible Creek.

So here was the sneaky plan. Bushwack a few hundred feet down into the canyon at the beginning of the steepest section, and bring running shoes for the shuttle back to the top.
I got to the creek about noon; so much for the early start.
The hike down to the creek was incredibly steep with lots of loose soil and thorny shrubs. No devil’s club at least. I finally make it down to the creek and am utterly unimpressed with the amount of water. I guess it didn’t rain much out here last night. Oh well. Let’s make it work.

View from the put-in. I boated much of this. Site of the first of 7 pins. 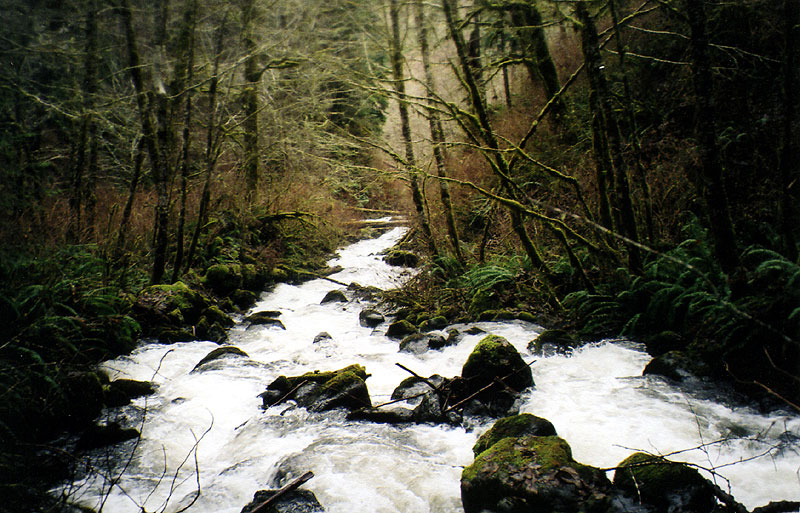 The view upstream sure was impressive to look at with the creek basically coming down the side of a hill. Maybe with more water and less wood it would go but today, it was just rocks and not feasible. After a long scout downstream I realized that a could probably scrape and grind my way down a few hundred yards as long as I could keep from getting pinned sideways. I found an old log to launch off and dropped in, paddled once, and got pinned sideways in the first drop. Shit. Cockpit facing upstream so no way to keep the boat from filling up with water once I pulled the skirt. O.K. Do-over? After that, the first few hundred yards were pretty good. And then I entered what was one of the lushest shrub forests I’d seen anywhere. With barely enough width between overhanging bushes and a couple inches of water depth I was able to stay in my boat maybe 10% of the time. The rest of my time was spent crashing through the bushes and up and over big logs. Not exactly super fun but hey, I knew what I was getting into. I decided at one point that it was quicker to keep walking through the woods even though short sections of the creek were boatable.

One of the “fun”, “boatable” sections in the shrub forest 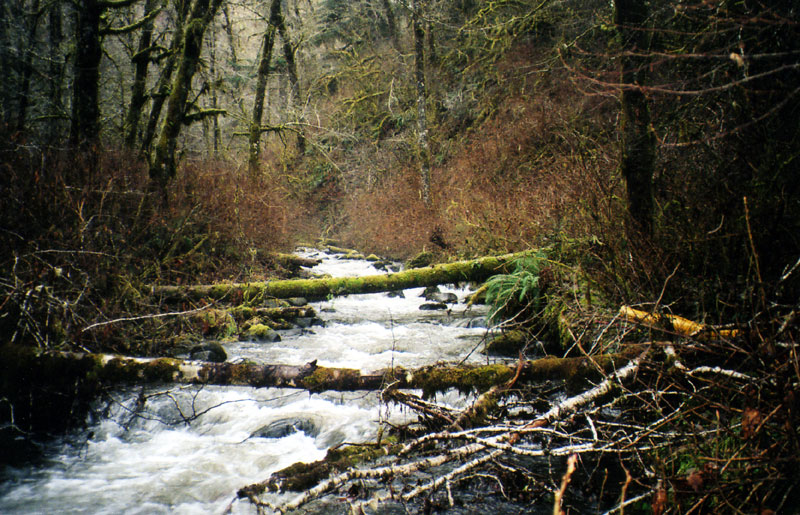 Remember that 12:00 start? Well I was seriously beginning to worry about darkness. I figured there might be some kind of gorge or waterfalls downstream because I really hadn’t dropped that much gradient and I’d already covered a lot of ground. Finally the creek started to channelize a little bit making it easier to stay in the river and then it was there! A legitimate Class 2 drop! Sweet. I was so happy I took a picture.

First real drop after the steep, manky section at the put-in. Notice the DARK background in this picture? 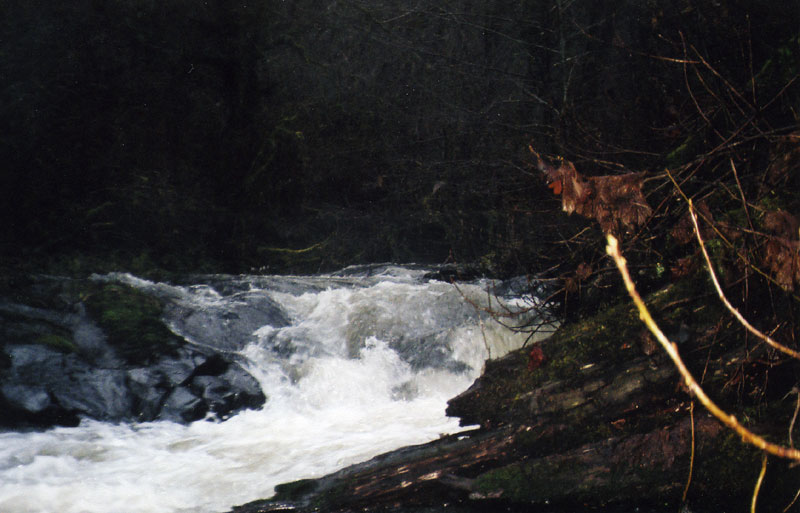 Just downstream of this drop was a nice little bedrock slide. Sweet this is really getting fun! Wait a minute, are those gorge walls downstream? Where the heck did the creek go? Oh crap, is that a small eddy at the lip of a walled in horizon line? With some quick paddling I was able to catch a small eddy right at the lip of a 10′ waterfall and take a look. I was not overjoyed to find that the main drop was created by a couple big, old logs. Luckily there was a small crack along the left blocked from the main current by another log and I was able to squeeze out of my boat and get to the bottom of the falls. From here it was another hundred yards to another horizon line. Oh joy, the gorge I’ve been waiting for and it’s getting seriously dark now. This turned out to be a 15′ falls that was super clean except for the big log pinned vertically in the ideal landing spot. It was possible to run this one but being solo, I didn’t want to risk hitting the log and getting worked in the hole. Particularly since I could see another big horizon line downstream and sheer gorge walls on either side. Definitely no hiking out here. 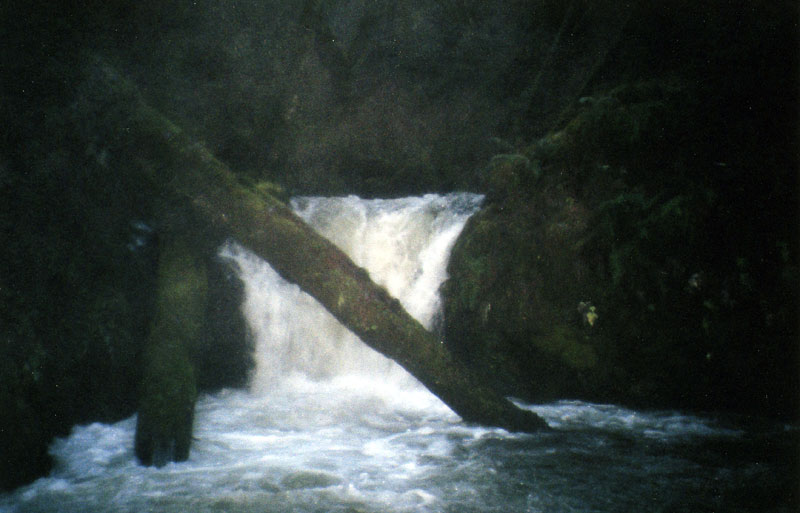 So how am I going to portage this falls? With vertical walls on either side there really wasn’t any way to climb down to creek level. Luckily there was second log pinned parallel to the current along the right wall which I could use to lower myself about halfway down to the pool and away from the base of the falls. I clipped my boat to my throwbag and launched it ahead of me into the pool and then lowered myself halfway and jumped into the pool and was able to swim to a gravel bar to scout the next big drop. There was a big logjam blocking the whole river at the top of the falls and after a quick scout from the top of the falls I realized that this beautiful 30′ falls had wood extending the length of the falls and some at the base. The real question was how was I going to get around this thing? The right side was completely cliffed out but there was a narrow goat-track along the left wall that I thought would go. Unfortunately this track ended in a shallow gully 30′ above the pool at the base of the falls. Once again I clipped in my kayak and lowered carefully down into the pool. There was a big tree along this side of the pool which kind of created a protective eddy but I didn’t have any idea how deep the pool was and I had no idea how I was going to get back into my boat. After I thought I felt my boat get to the pool I began a careful climb down the wall, holding onto my rope so the boat wouldn’t float away. About halfway down, the fern I was using for a hand-hold pulled out of the wall and I began a fast slide down the wall to meet the pool, log, and boat. Thankfully I missed the log, the pool was deep with no rocks and I landed right next to my boat with my paddle still in my hand. A short swim downstream and I was able to get out on a gravel bar and sort myself out.

View of the big falls. Notice the DARKNESS and the rain

At this point I figured if I was lucky that was the last of the gorge and waterfalls and I could make some serious time the rest of the way. I now knew that I was going to finish in the dark. It was just a question of how much I would have to paddle in the dark and what the creek would be like. Thankfully there was some nice, open rapids below the big falls and with the addition of a side creek just downstream, there was finally enough water to legitimately boat. I made some great time for the next half mile and then hit a lake. Actually it wasn’t a lake, just a big pool backed up behind some huge logs in a flat, open part of the canyon. I was actually relived to see this as I recognized the area from a short scout from the road earlier and knew that I was getting pretty close to the my take-out at the confluence with the Nestucca River. Below the logs was a nice section with a couple good drops. Unfortunately, I really couldn’t see anything as it was now completely dark. I was guessing what would be the best line but it worked out o.k. Well, except for the very last drop which was a steep ledge dropping right onto a rock. This turned out to be the last pin of the trip as I flushed into the Nestucca after rocking myself off the rock.

I was so happy to be paddling on the Nestucca with some waves and deep water that I almost forgot that I needed to take out here and get back up to my truck. Once I hauled my boat up on the bank I realized that I was missing one running shoe. Crap!. Must’ve fallen out on one of the portages. So it is 3.5 miles back to the car in my booties in the pitch black. Well, rural Oregon is a bit scary late at night by yourself. Besides worrying about cougar or other wildlife, there is the distinct possibility of running into some unfriendly locals who don’t like being bothered. These two factors succeeded in motivating me to hustle up the steep road to my car. At one point an old car slowed down on the way past and stopped a little ways away from me. Great. Turned out they just wanted to make sure I was o.k. Nice folks. Unfortunately they were headed the wrong way to hitch a ride. After about an hour of hiking/jogging, I reached the car and celebrated with a cold beer. All that was left was to change into some dry, unsmelly clothes, round up (and find!) my boat, and head home.

Bible Creek was close to becoming a debacle but I managed to pull it off. I wish there had been more water and more time to really appreciate the canyon. As it was, it was a great way to spend the day.
“So what about that Bible Creek? What’s up with that?”