The North Fork of the Clackamas River begins as a tiny stream in the foothills of the Cascades; gradually building in size and plunging through the basalt of the Clackamas River canyon to end in the backwaters of the NF reservoir. The river is at the bottom of a steep and isolated canyon and is dotted with waterfalls and ledge drops and that ever-present NW boater obstacle–wood. I’d run the lower 3.5 miles of the NF last fall with Jason and discovered a pretty decent run with good rapids, one hard portage and an amazing amount of wood. I’d also done about a mile of the upper run about the same time. Both trips were at very low water so I wanted to get back in there at higher water and see if there was enough fun to overcome the drudgery of so many wood portages. Suprisingly enough, Marc was a willing accomplice for a top to bottom run. e best understand that for better or worse, rafting and kayaking rivers is a big part of my life. I often wonder why. I know when I first started boating I viewed boating primarily as a way to get out and be a part of moving water; something that has always fascinated me. And of course river canyons are some of the most beautiful places anywhere. And while those early motivations still are important, particularly when I’m rafting, there are times when I know there must be other, stronger motivations for kayaking.

Marc runs a small ledge shortly below the put-in. 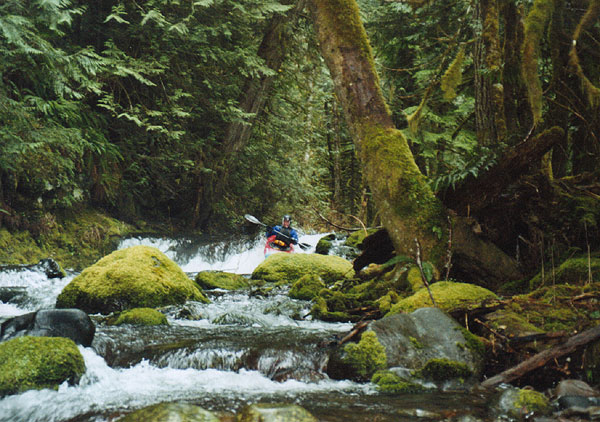 After getting a late start, we put-on just downstream of some wood and 50 yards later were back out of our boats to portage another log jam. Unbeknownst to us, this was to be our routine for the next 2 miles. Every now and then we would run a decent rapid or ledge but almost always it was followed by another wood portage. At one point Marc ran a 5-foot drop created by a log jam while I stood on a log to push it below the surface and held some other branches out of his way. Somewhere in this section I missed a boof over a log and had to wait for Marc to pull me out of the current and over the log. In addition to the portages we were doing quite a few sketchy log limbos just to try and stay in our boats for a little longer. Finally we made it to the first waterfall, a 20-foot sliding drop into a large pool. 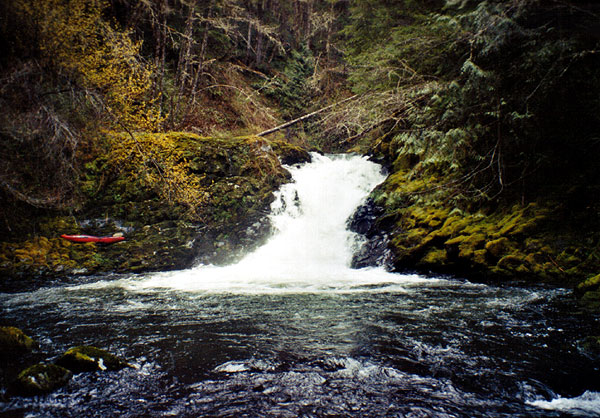 I’d scouted this drop on my first trip at low water and thought I’d run it with more water but after seeing a partially submerged tree in the landing zone I decided to pass it up. We portaged this drop easily down the right face of the falls and scouted the 10-foot ledge drop immediately downstream. I’d done the difficult portage around this drop the last time and refused to do it again. There are rocks in the landing zone but somehow I didn’t hit anything on my run. Marc took the better line down the middle off a good boof and landed flat without getting his head wet.

Marc boofing the 10-footer below the waterfall 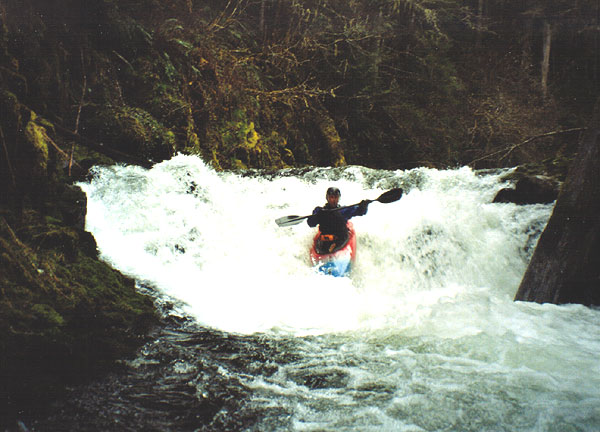 After slaloming through some more wood we got to another 10-foot ledge which would have been fun to run except the overhanging logs would force you to duck as you boofed and the landing looks like it lands in a shallow crack. We portaged on the right. After this ledge the river started to open up a little more, flatten out and there seemed to be less wood. We ran a couple more fun ledge drops before the river completely flattened out until the 1/2 way point.

By this point both of us were very tired and if it hadn’t been for a 1/2 mile uphill hike and 4 mile hike back to the shuttle car, we probably would have called it a day. At least this section was a little more of a known entity since I had just run it in the fall. When we got to the first significant rapid I decided to run the left channel around an island and punch through a small hole at the bottom while Marc decided to try the right channel. Unfortunately the right channel was too shallow to run so Marc seal-launched back into the river as I scouted the next ledge around the corner. Just as I was getting into my boat I looked over my shoulder to see Marc upside down under a small log coming off the right bank. As it turned out, he seal-launched into the river and underestimated the current pushing into the log. After he was forced to exit his boat, the boat came ripping past me and launched off the next ledge and disappeared. Knowing that a lost boat in this part of the canyon would be disastrous, I quickly put on my skirt and started chasing the boat. Luckily I was able to push the boat up on to a rock about a hundred yards downstream. 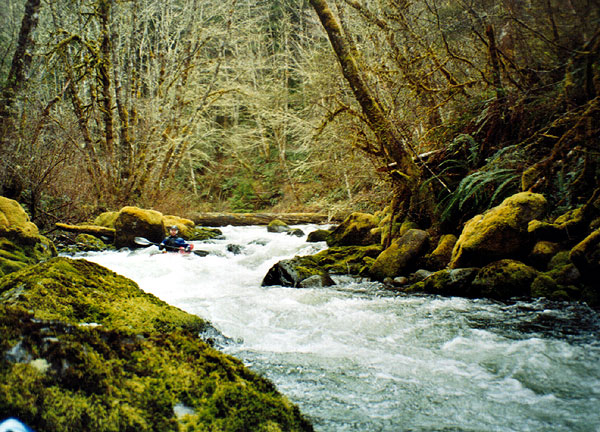 For the next 1/2 mile or so the river contains a lot of fun Class 3-4 rapids with some small eddies or short pools in between. There is a small gorge with a dangerous tree wedged in it that we were on the lookout for. Jason and I marked the area by sticking a wrecked kayak up in a tree when we came through last time and Marc and I were glad to see it was still there. Shortly after the portage around the tree we came to “The Big Portage”. This portage requires finding an old logging road which climbs up the side of the canyon and then continues downstream past an unrunnable 50 foot falls. After a little hunting we were able to find the road and I was pleasantly suprised that the hike was not too bad. We roped our boats back down to the river right above the only Class 5 rapid on this stretch. While Marc was repacking the ropes I went down and scouted out the take-out eddies before the falls. Unfortunately, Marc tried to sneak the ledge above the eddies and got knocked off-line by some rocks, causing him to drop into the ledge hole sideways and do a great back-ender out of the hole. He was able to catch the last chance eddy before the falls but his eyes were still pretty big by the time I got down there.

Since I hadn’t run this drop the last time I was on this run I was determined to run it this time. By this point I was also figuring that I might not do this run again so I figured I might not have another chance. The falls drops about 20 feet over three steps. I decided to boof the first step going left to right, punching a hole in the landing, and then ride the current as it makes a turn to the left and drops the remaining 10 feet into a pool with a pretty powerful hole. I figured I wouldn’t have much time to do anything after the first boof so I planned on just submarining through the bottom hole and hope for the best. I hit the top boof perfect and as I figured, couldn’t see anything until I was launching off the bottom drop and going deep. Unfortunately I hit a rock in the landing and rolled up in an eddy at the bottom that was feeding back into the hole. While Marc was yelling encouragement I dug in and paddled out of the eddy into the pool. This is one of the best waterfalls I’ve run. Pure fun!

The author drops into the froth 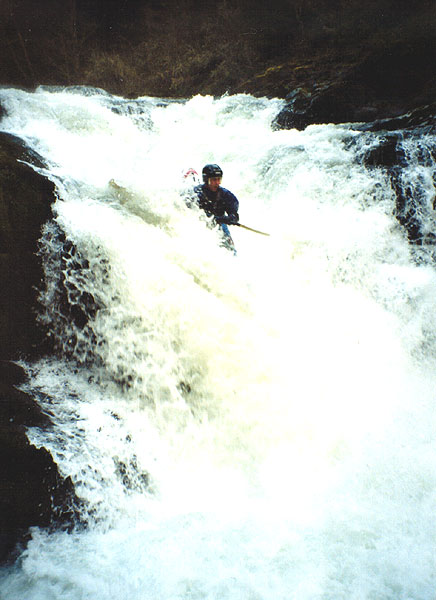 After the falls we figured we were on the home stretch which was good considering we were both exhausted. Unfortunately I forgot that there are some solid, steep Class 4 rapids in the next 2 miles. By this time we were worried about running out of daylight so we were boat scouting everything we could and running some stuff that we should have scouted. I got broached above one rapid and Marc broke his backband above another Class 4 rapid. After a seemingly never-ending gauntlet of trashy boulder gardens and ledges we hit the knockout punch on this run; 6-8 portages around logs. Some of these involved carrying our boats through the bushes and then back to the river only to find another log 30 yards downstream. Needless to say, neither of us were in particularly good moods at this point. Finally, we finished the last log portage only to find a cable strung across the river. While I was cursing Marc pointed out that maybe the presence of the cable indicated we were close to the reservoir. With that I headed around the next corner and gave a whoop of joy as the river ended suddenly in the reservoir. 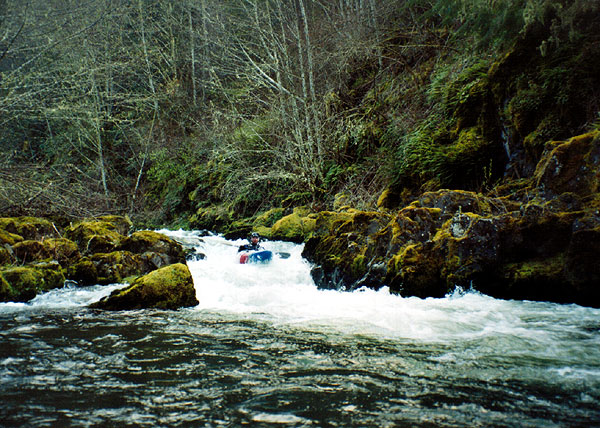