The Killer Fang section of the Clackamas River has gotten a bad rap over the years. Early guide descriptions were replete with dire warnings of the difficulty of the rapids and generally scared a lot of boaters away. Most first-time visitors to this section are surprised that most of the run is fun Class 3. This section has much different geology than the more popular section downstream and is much more isolated. Both these factors make the run very worthwhile. 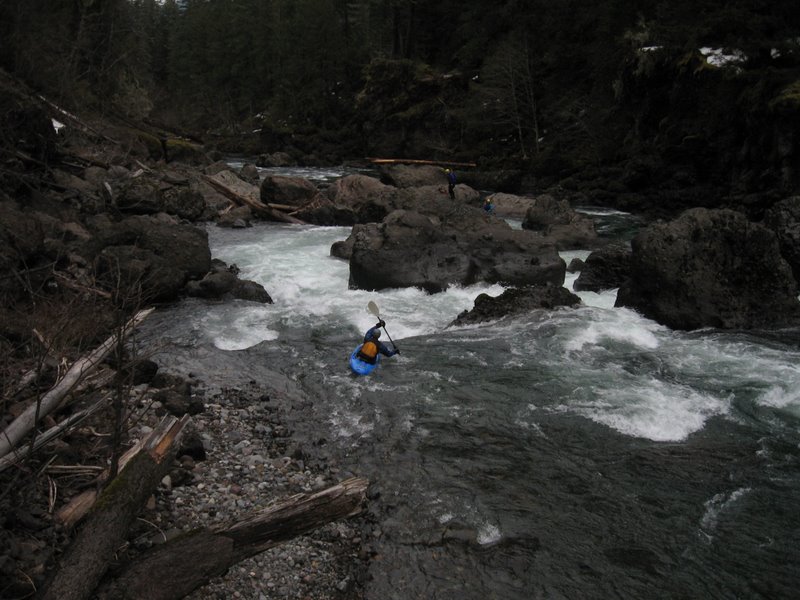 Most of the rapids on this section are boulder gardens formed from the extremely unstable geology. Except at high water, there are plenty of eddies to catch as you work your way through the rapids. Even at high water there are long pools at the bottom of all the rapids.

After about a mile of flat water the first rapids appear. These are some nice Class 3 boulder gardens with the occasional longer rapid. The first named rapid is about a mile into the trip. Hole in the River is really just a long boulder garden immediately after a left turn. At most water levels it has a technical lead in to a steeper drop between boulders at the bottom. At high water, the boulders at bottom turn into huge holes. The hole on the right is particularly fearsome but can be sneaked on the far right or boaters can thread the needle through both holes down the middle.

After Hole in the River the rapids resume their Class 3 character until Alder Flat. Alder Flat is about 5 miles into the run and can be tough to recognize for first-timers. It is a big pool just around a right corner from a rapid with a left channel that slams into a big boulder and a right channel that ends amongst some other big boulders. There is a primitive Forest Service campsite on the right bank which has a trail that leads to Hwy. 224 about a mile from the river. There is also currently a huge landslide on the right just downstream of the pool. Just around the corner from Alder Flat is an obvious rapid called Drop Stopper. This one is worth a scout on the left as the river slams its way between some pretty big boulders. There are multiple lines but look carefully for any logs that might have wedged in the narrow slots at the bottom.

After Drop Stopper is a rapid with great waves that ends in a beautiful pool with a tall cliff on the left. This is where you want to really pay attention. From the pool is a long set of waves that ends with a sharp turn to the right through 2 narrow channels. This is Prelude rapid and Killer Fang rapid lies just downstream. I recommend catching the big eddy on the left above the two slots. You can scout both the left slot of Prelude and the pool above Killer Fang by scrambling along the left wall. The left slot looks intimidating from above but is really just a fun 4 ft. drop through a hole and into the pool below. Make sure you take care here not to get pushed too far left as the current trails off into Killer Fang below the pool. There is one more eddy on the left above Killer Fang but it probably should only be used as last resort.

Once in the pool below the slots, paddle over to the right side of the pool and pick your way through the rocks to portage Killer Fang. The portage around Killer Fang is tough for rafts but doable with a light boat and enough people. Killer Fang rapid is formed by a large slab of rock that fell off the cliff on the left. This rock blocks all the river except for narrow slot on the left. This wouldn't be so bad if most of the river didn't go about 15 ft. under the right side of the rock. The underwater sieve has a few logs stuck in it just to make it even more ugly. Although Killer Fang is runnable, I've never thought the fun factor warranted the risk. Most boaters put in immediately below Killer Fang.

Around the next corner from Killer Fang and immediately below a pushy Class 3 rapid is the Sieve. This rapid used to be a straightforward Class 3 rapid but the addition of a few rocks made it a solid Class 4. The easiest scout is from the small eddies on the left immediately above a narrow slot. Give this one a good look as there is a dangerous sieve at the bottom of the left slot. This one can be portaged without too much difficulty on the left.

Once below the Sieve there are a couple more fun rapids to relieve some tension and then the road comes into sight.

The crux of the run is, obviously, making sure not to get blown into Killer Fang. I haven't heard of anyone having any trouble lately but take care and look out for each other. Watch out for the sieve at the bottom of the left slot in the Sieve. Also, this section usually has a lot more wood and nasty rock than the section downstream. At high water there are some great waves but the eddy above Prelude gets swirly.

Both Killer Fang and the Sieve can be scouted by hiking down a nice trail from Hwy. 224. The trail begins at a pull-out on the right about 7/10 of a mile upstream of the take-out. The trail reaches the river at the Sieve and you can easily hike upstream along the river to reach Killer Fang. This is recommended if you don't have someone with you who knows the run.

Rafting Note: The portage around Killer Fang is a bear. It is a lot easier with a small, light boat but still expect some awkward lifting over big, abrasive boulders. Lining the left side of the Sieve is not too bad but there are plenty of places to wrap the boat at high water. There are some fantastic, big wave hits in this section at high water but it is up to you to decide whether it is worth the trouble getting around Killer Fang.

How to get there

The take-out is at Sandstone bridge which is just upstream of the Three Lynx Power Plant about 23 miles east of Estacada on Hwy. 224

Continue upstream on Hwy. 224/FS 46 past the old Ripplebrook ranger station. About a mile past Riverside campground is the junction with FS 63. Bear right on FS 63 which immediately crosses the Clackamas River and put-in on the left above the bridge or at the Two Rivers Day Use area on the right after the bridge.

Alternate put-in (GPS: 45o02.952'N, 122o03.486'W)
If you want to avoid the first mile of flat water look for a pull-out on the right where the road comes back in view of the river about a half mile downstream of Riverside Campground.

More Info
Check out Jason's description of this run.